Arcs Of Semen began as an idle gatecrash into the marriage between shameless self-promotion and artistic self-doubt. Specialising in abstract forms of citizenship, Arcs Of Semen quickly branched out into experimental urbanism, psychogeographic abjection therapies, and experience economics. A heavily branded mythology was implemented, reinforced by an anonymous and low-key fly-poster campaign, the appointment of agent Tetson Hawker and a new place of birth, Argentina.

Key moments in the Arcs Of Semen trajectory:

1982: From the Greek island of Ydra, looking towards the distant landmass of the Peloponnesus, Arcs Of Semen envisioned the rising of a mushroom cloud. In this instant, he imagined he had travelled the world, posting canisters of 35mm film to an address that served as receptacle, not home. “It was of no consequence whether I ever saw any resultant prints”, he later recalled.

2006 – 2009: Arcs Of Semen cared for gentlemen with acquired brain injuries. He became depressed, grew a moustache and started wearing white trainers. On his days off, he took to Newport’s town centre where he stole enforced photo opportunities from anyone he liked the look of. The photographs resulted in the series Deadbeat Delivery, which social and cultural commentator AJ Curtis believes preempted the present day selfie.

He staged the imaginary Doctor Hill’s Office which recreated the telephone conversations from the Roman Polanski film Rosemary’s Baby in various telephone boxes around Newport. It was performed on June 28, the due date of Rosemary’s baby. 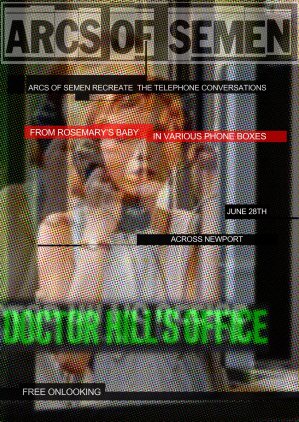 Also around this time, the owner of the care home agreed to finance advertising space Arcs Of Semen was planning to buy in a widely circulated local What’s On guide. He ran the advert, a message of congratulations to the Newport West MP Paul Flynn, with the care home owner contributing £10 towards its £90 cost.

2009 – 2010: Arcs Of Semen undertook an ongoing fly-posting campaign before flying to the United States to research the east coast moustache.

2012: Posing as a freelance labourer, Arcs Of Semen had begun excavating a mud-filled cellar in the Pillgwenlly area of Newport. He staged the imaginary The Exhumation Of Princess Diana in the garden of the property. At the end of the year, he flew to India where he was held captive by former gangsters in the Punjab. The experience was semi-documented and became the basis for the BOSCH film, Escape From Stockholm, currently in production.

Arcs Of Semen is currently posing as Art C**t in a continued effort to foist liminality upon the mainstream and to further explore the High Street’s response to absurdist public action.